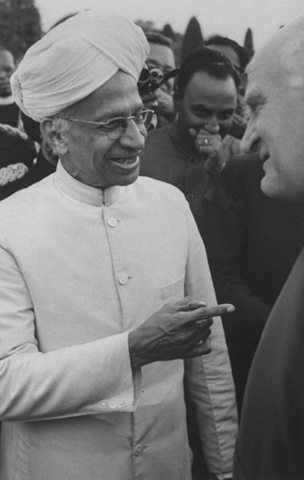 Indian soil is the home of mystics and philosophers. Their long-standing involvement with divine affairs has given rise to host of ideologies, which have always enraptured the hearts and minds of all elevated souls. When one talks about Radhakrishnan the image of an educationist, possessing a philosopher’s soul, gets stuck in our consciousness who wished to see his pupils turning into carrier of the India. After all, furtherance of great ‘argumentative tradition’ was his prime aim. This is why he was an educationist par excellence, whose ideas left an indelible impression on everyone who came in contact with him. Strange are the affairs of nature. He appeared at a time when India desperately needed a soul who could unravel the inherent intricacies of Indian philosophical system in a way which enabled the masses, especially the conscious souls, to grasp their meaning without losing sight of their essence. It was none but Radhakrishnan who could do it with ease. After all, he was the nature’s ‘beloved agent’ due to his peculiar bent if mind that intercepted philosophical truths with perfect clarity. In this piece I would like to confine myself to  his philosophical revelations.

We are living in age in which the ‘anxiety of doubt and meaningless is dominant’. In this background, the role of philosophers has gained immense importance. The philosophers bring under their contemplation ‘what time and nature have extinguished’ and thus they gain the power to predict the unpredictable. According to Radhkrishnan the humanity is on the brink of total collapse because mutual mistrust has blocked real communication. We have maintained a negatives silence that has reduced the world into mad-house. This ‘lack of understanding’ that has caused fragmentation of the society needs to be checked. But that can never be achieved if we don’t develop the capacity to look within. “If you want to be a truly loving being, it is essential for you to understand what our feelings are. How cursed mankind is?

We know the right, but we do not do it; we know the wrong, but we cannot abstain from it. It is this cursedness in human nature, which has to be got over. Love, therefore, is not a mere brilliance of intellect but it is discipline of the heart. Without discipline mere brilliance will not do.”In Geeta this inability to execute the desired despite being aware of its advantages has been explained in terms of man’s bond with previous samskaras. Desires can never be annihilated unless man rise above chain of reactions triggered by ignorance—the root cause of all desires. Radhakrishnan sounds true when he says that it needs an intense soul- searching to get above fractured intellectual knowledge and hence come in touch of ‘Intuitive knowing’, which alone makes the inward journey possible. Intuitive knowing, according to him, is unimprisoned by the divisions of space, successions of time or sequences of cause and effect. ‘Intellectual knowledge is a scattered, broken movement of the one undivided infinite life which is all –possessing and ever satisfied…It is through quieting the strivings of the will and the empirical intellect that the conditions are realized for the revelation of the Supreme in an individual soul. Therefore having calm, subdued quiet, patiently enduring and collected, one sees the Self just in the self”. Only the man who has a pure heart (read childlike nature) can know God. In one of the famous episodes in the Upanishad Sanatkumara makes Narada aware of futility of excessive learning. The encyclopedic knowledge of Narada did not make him attain tranquility of mind. Thanks to the wisdom of Sanatkumara that ultimately pushed him beyond the realm of intellect. Faust says:

” I have studied now philosophy
And jurisprudence and medicine
And even, alas theology,
With vision keen, from end to end
And yet poor fool, with all my learning
I am no wiser than before.”

It must be very clear from the above disclosures that ‘no amount of theoretical knowledge can serve as a substitute for the practice of life of spirit.’ In other ors, the art of swimming cannot be gained by mere articulation of its rules—it’s by getting into the alone one can turn into a perfect swimmer. One of the drawbacks of present age is that communication between individuals has totally evaporated. Even the inventions of science have not been able to reduce the distance between due to air of mistrust. Mobile flashing may have become a hot-favorite thing in Yuppie circles but it hardly evokes a fruitful dialogue. Similarly, Internet no doubt has shattered boundaries of nation but has it dissolved the loneliness, which exists within the individuals? The answer is emphatic no. Why this monstrous silence has become part of our culture, especially when we are living in a country known for its festivals? One reason for it could be that the age in which we are trapped today has been hijacked by transitions of all sorts. Prominent features of society wrapped in transition phase are ‘disintegration and renewal’. Since we are still in the process of development of society that caters to new ideas and beliefs as its own the confusion has gained upper hand.

Under this circumstances ‘the history of the new world, of one world which is rich in range and majestic in its scope’ can never be attained if we keep on fanning suicidal tendencies breeding separation and cynicism. Radhakrishnan offering a solution says, “The only attitude that we can adopt in the present context is an attitude not of exclusiveness but of comprehension, not of intolerance but of understandings, not of hatred and fanaticism but of appreciation and assimilation of whatever is valuable”. Drawing a rather unusual comparison let me say that rigidity in beliefs only produces Jihadis or, for that matter, communists. For both of them whoever falls outside rather perverse mindset doesn’t deserve a right to live further .If he does manage to survived hi is either a ‘kafir’ or ‘fascist’. Such dangerous classifications alone have turned the world into hell.

According to Radhakrishnan the goal of life should be to rise above day-to-running and get merged with the finer spiritual existence , which all the time keep surfacing form of antipathy towards earthly pursuits. But this can never be the reality so long our identification with ‘selfish ego’ that considers ‘conceptual reason ‘as ultimate doesn’t get shattered. If religion has turned into source of bitterness it’s because of wrong identification with their symbols considering ‘these relative symbols for the absolute truth’. The confusion that arises due to ‘self-confident jugglery’ with symbols and definitions makes realization of “supreme self’ a distant dream .Finally, let’s grasp this fully named perfectly that aim of life is to mould yourself in the image of divine. Radhakrisnan states that “nothing on earth is utterly perfect or utterly without perfection. Those who have the visions of perfection strive continually to increase the perfection ….Life is ever striving for its fuller creative manifestation. The life of God is the fullness of our life.”

Finally, some thoughts from his book  ” Eastern Religions And Western Thought” :

With all her poverty and degradation , her suffering and subjection , India still bears witness to the cult of the spirit . It is not right to complain that India has failed to because the she has followed after things spiritual .She has failed because she has not followed after them sufficiently . She has not learned how to make spirit entirely the master of life , but has created in recent times a gulf between spirit and life and has rested in a compromise .

To be inspired in our thoughts by divine knowledge , to be moved in our will by the divine purpose , to mould our emotions into harmony with divine bliss , to get at the great self of truth , goodness , and beauty to which we give the name of God as a spiritual presence , to raise our whole being and life to the divine status , is the ultimate purpose and meaning of human living . Some exceptional individuals have achieved this status and harmony .They are the highest type of humanity yet reached and indicate the final shape which humanity has to assume . They are the forerunners of the new race .

S_Radhakrishnan: The man who really knew the finer points of Indian philosophy