A Discussion On Future Of Journalism 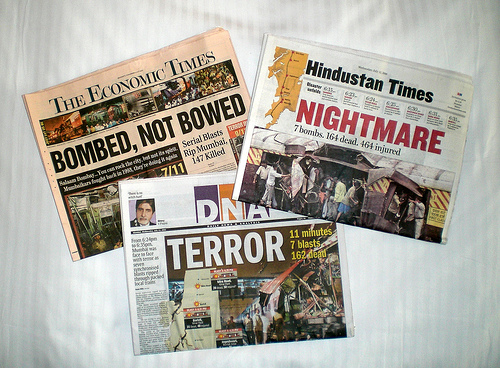 What’s The Future Of Print Media?

Very recently, some of the writers and journalists furiously got involved in a discussion related with future of journalism on LinkedIn website. Most of us were of the opinion that arrival of newer mediums like Internet has hit hard practices related with old school of journalism. In my eye own eyes, the future doesn’t seem bright unless it prepares itself well to imbibe new changes. The old mindset must give way to better one in league with recent patterns. The problem is that journalists and media groups, belonging to previous generations, treat the rise of bloggers and citizen journalism as wrong phenomenon in the world of journalism. They are not   open to create a balance between the old forms of journalism with newer methods of news presentation. That does not seem to be the case since old heads continue to remain skeptical.

However, my main concern in the debate was related with the survival of people seriously involved in the field of journalism. It’s harsh reality that even after introduction of dynamic medium like Internet, the economic scenario for talented souls remains grim.   So if we are not paying them well, I wonder who would dare to be methodical and research oriented? Who would really bother to add new dimensions in the qualitative standards? So my point of view is that let’s not only provide these new methods appropriate space but also ensure that financially they enjoy a stable position, if not strong.

That’s what some of us said on the prestigious   “Online  Reporters And Editors” forum.

“Time changes everything except something within us which is always surprised by change.” (Thomas Hardy) The future is surely bright, only if journalists learn to maintain pace with changes taking place in the world of news and views! Sadly, we waste our precious time in mindless criticism of the recent trends, unleashed by the intervention of Internet. And why are we not discussing about the exploitation of journalists? They are paid so less by the media houses even as they come to deliver quality reports in short time. In fact, reporters, belonging to both online and print section, are the most harassed lot in term of monetary benefits. For media houses, it appears such a pathetic situation means nothing as they have kept deepening the insecurities in media sector.

How can future be bright when there is a sword hanging over your head in terms of job security?

One should not forget that journalists working for NYT, CBS, CNN, Fox News Channel and etc. are the ones exhibiting high journalistic standards! Yet they compromise with truth, and give way to biases of all sorts! Against this backdrop, when we start hating new alternatives, the future of journalism becomes more complicated and grave.

Arvind, the fact that you mention Fox News Channel in the same breath with the others indicates that you lack an understanding of both high journalistic standards and the way that media people can insert bias into their reporting, because FNC has taken biased reporting to an entirely new and shameful level.

I have taken note of the situation from Indian eyes! The subtle difference that you highlight is not of much importance to me just the way difference between Star TV India’s approach and Zee TV’s approach remains unnoticed by you, and, above all, is not of much importance to you unless you are based in India! And yes, you missed something very important. When I placed all of them in one category, it was to show that even when trained journalists from old school of journalism are involved the chances are high that news reports could be biased, twisted and incomplete. If that’s the case, there is little merit in condemning people belonging to new forms of news presentation.

The operative part of my comment is not my so-called ignorance about US media. The question that really matters is that how come trained journalist having faith in objectivity, accuracy and other fine values created such a mess of extraordinary type, which has compelled all of us to discuss the future of journalism? It’s their biases and partisan approach, which eroded the faith of readers/viewers in print media/news channels.

The truth, Arvind, is that news journalism is expensive, and unless it has the luxury of a hands off sponsor then the power of ownership will influence it. There is a wider context and this is no new development. In the dying days of the nineteenth century, Adolph Ochs purchased an ailing New York Times. He turned it around on the strength of great journalism and producing ‘All the news that’s fit to print’. People would happily pay for good, not just sensational, information about human affairs. And advertising revenues followed too. The NYT went on to achieve preeminence in the world beyond New York, and other papers copied its example.

But then the news, which had honestly monitored and spoken to power for so long became power itself. Advertising revenue began to exceed that which was derived from serving its audience with integrity and excellent journalism. The audience became a market, a conflict was born between fiduciary responsibility and integrity, the newsroom and marketing department began sharing elevators – and the mess which you perceive was made – all over again.

Recently, we have seen the rise of Al Jazeera as, probably, the world’s most respected news organisation. In the same epoch, the leadership aspirations of both the NYT and the Guardian appear to hark back to the values of great journalism. But while Al Jazeera may depend on the stringless resources of Emir Sheikh Hamad bin Khalifa al-Thani, the Guardian and the New York Times must trade their way to the high ground again. Audiences and journalists alike live in an interregnum of chaos.

Arvind, the “mess” you refer to is almost entirely attributed to electronic media’s pursuit of the almighty dollar, though with some exceptions I don’t consider electronic media to be journalists as much as entertainers. What biases show up in the reporting of print media, I think, resulted mostly from their misguided effort to pander to the same nitwits among the populace who think a combination of celebrity news and opinion is journalism. It is an unfortunate path that is taken when profits outweigh principle.

Some hate the rise of newer alternatives! 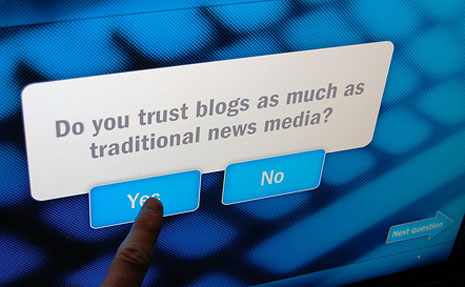 In one of the recent discussions on a prominent LinkedIn forum, some participants representing prestigious journalistic bodies were of the opinion that bloggers lack the expertise which is found in the journalists. They conveyed the impression that since journalists get trained at recognized school of journalism, they display a better critical sense, exhibit better style and react in more mature way. That makes them a greater and more respectable entity than a blogger. However, in my eyes, they missed an important aspect: Why should a blogger be interested in emerging as a good journalist?

It can be easily understood that rising importance of bloggers and their ever-increasing influence have unsettled their counterparts in journalistic circles. However, I am not interested in being at loggerheads with them. I am, at present, more interested in making bloggers aware of the fact that instead of aspiring to emerge as a good journalist, it’s time to acknowledge the uniqueness associated with blogging and how to use it well to do justice with critical issues.

The difference between them should exist even as both come to use similar method and approach while dealing with sensitive issues. The bloggers should not be coloured in the traits which has made journalism a profession instead of a mission! One cannot overlook the fact that journalists or editors having a developed critical sense often display biased approach while framing the perspective.

For instance, if one reads India related news items in reputed foreign magazines one would always notice prejudices of foreign correspondents. Still they boast of impartiality and transparency! The bloggers, more often than not, are free from external pressures to view the issue from a particular angle only. They are free to present the issue as it is. It’s another thing that being human they give way to prejudiced opinions.

Anyway, that’s not an attempt to ignore the role of good institutes but I am against any division based on this assumption that journalists are better since they have honed their skills at some institute. Bloggers, too, have their own share of unique experiences which cannot be overlooked only because they have not attended any journalistic institution!

Anyway, let the blogger set good precedents without the desire to emerge as a good journalist. After all, the bloggers have emerged as a better alternative to biased media. There is no need for them to copycat mannerism prevalent in the journalistic circles. The bloggers should aim to be better than journalists instead of being like them!