Journeys, whether long or short, always teach you something. For writers like us they are the best means to rise above writer’s block. Last month I happened to visit Gorakhpur, situated in underdeveloped eastern part of Uttar Pradesh, to attend a seminar organized by Aavartan Magazine devoted to  quality research pertaining to social and environmental concerns. This research journal in the past has published excellent papers which have revealed lesser known facets of critical issues. This time Aavratan organized a seminar in coordination with  Deen Dayal Upadhyay University situated in Gorakhpur. The seminar was dedicated to promotion of Hindi- the official language of India. The star attraction of the event was the presidential speech by Dr. Genadi Shlomper, who happened to be Hindi Instructor at East Asia Department, Tel Aviv University, Israel.

It was a pretty interesting experience to hear from Dr.Genadi about his involvement with Hindi during formative years of his  career. His insights proved to be an eye-opener for huge crowd which had gathered there to listen a foreign visitor throwing light on worth of dealing in Hindi! After all, despite constitutional obligations Hindi has failed to get status of national language. Even in routine life of an average Indian enjoying upper middle class stature Hindi enjoys position of illegitimate wife!  Indians have beaten Englishmen in exhibiting their love for Victorian ideals and, of course, for English. Besides Dr. Genady,  listeners also had a wonderful opportunity to hear Israeli students pursuing Hindi language course at Tel Aviv University. Offir Mizrahi, Tal Gorsky, Matan Massika, Yakir Dahari, Alexandra Fer and Adi Fischer who were visiting various parts of India to understand the essence of Hindi in more refined manner had so many interesting tales to narrate regarding their experiences which they gathered during their current visit.

The photo feature specifically deals with places which I came to visit along with Israeli delegation comprising of students. We were mainly interested in seeing places around Gorakhpur rich in cultural terms. That included Gorakhnath Temple, Kushinagar associated with cremation of Gautam Buddha and Maghar which marks the spot of Kabir’s cremation. Gorakhpur has literary significance as well since great literary personalities like Firaq Gorakhpuri and Sachchidananda Hirananda Vatsyayan ‘Agyeya’ were associated with this city. Ageyeya was born in Kushinagar district.

Overall, it was a rewarding trip since it enlightened both head and heart. It’s time to let pictures tell the whole story about the various episodes of this beautiful journey. Interestingly, Dr. Genady was reluctant to tour this city since the place lacked desired cultural value. However, at the end of visit, he appeared to be overwhelmed after witnessing glorious facets of Indian history at such isolated places in this region especially temple and tomb of Kabeer standing adjacent to each other!

An important place! The Non-cooperation movement started by Mahatma Gandhi ended abruptly due to violent clash between the freedom fighters and Britishers at this place! That led to death of many policemen posted at police station when it was set ablaze on fire by the protestors.

Another View Of Gorakhpur Station 🙂

A View Of  Gorakhpur City 🙂

That’s U.G.C. Guest House Where We All Stayed During Aavartan’s Program Organised In Tandem With DDU University, Gorakhpur.

Dr. Genady Making Alexandra Rehearse Her Lesson Before The Start Of Program At University 🙂

Ofir whose Hindi was better than others in discussion with Mr. Genady 🙂 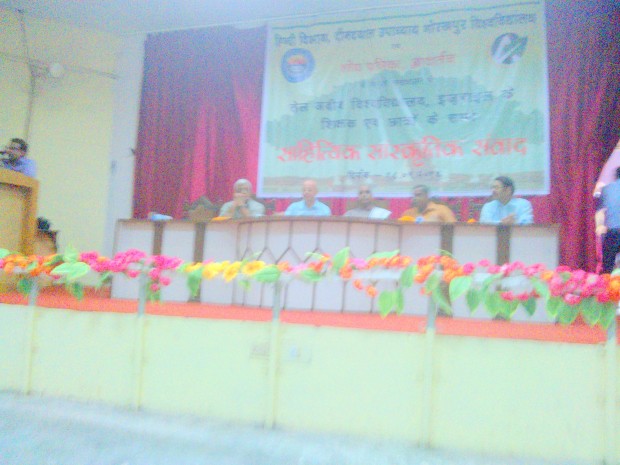 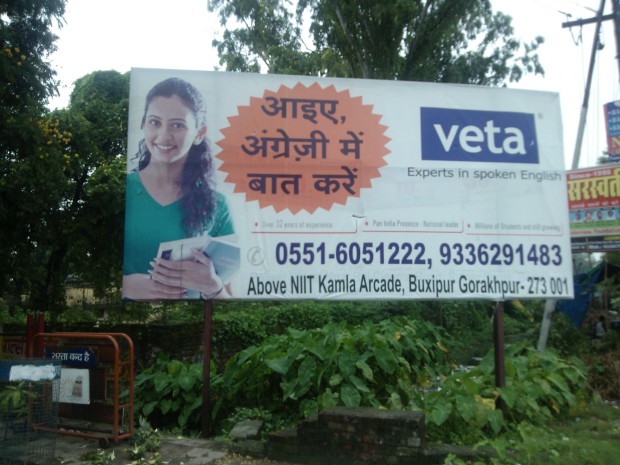 In My Eyes This Billboard Explains Why Hindi Never Gets Proper Place In India! This Poster Was Displayed Not Very Far From Gorakhpur University 😛

Inside Principal’s Office At Government School At Bhathat, Gorakhpur For Right Reasons 😛 Myself Right Behind Adi, Alexandra and Vaibhav Mani Tripathi Ji. Vaibhav Ji Played An Instrumental Role In Organising Most Of The Programmes During This Tour. 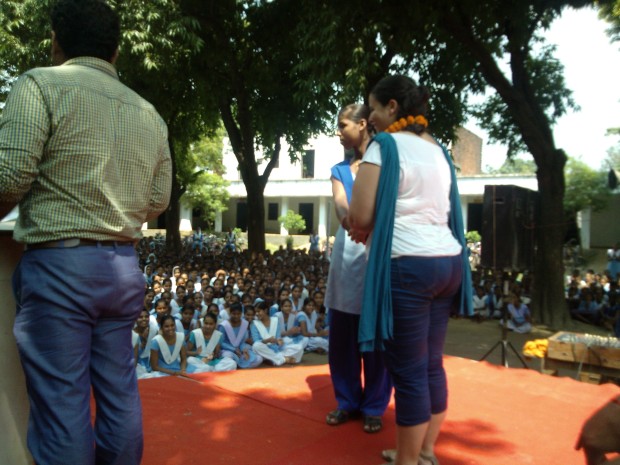 Our Students Were Really Very Excited To Meet Foreign Students 🙂

This Inter College Has Lots Of Trees On Its Campus 🙂 A Good Job On Part Of College Administration!!

Greenery Prevailed On Road Leading To Bhathat From Gorakhpur!

Places Close To Bhathat Are Famous For Making Images Of Terracotta!

Shiva Carved With Help Of Terracotta 🙂 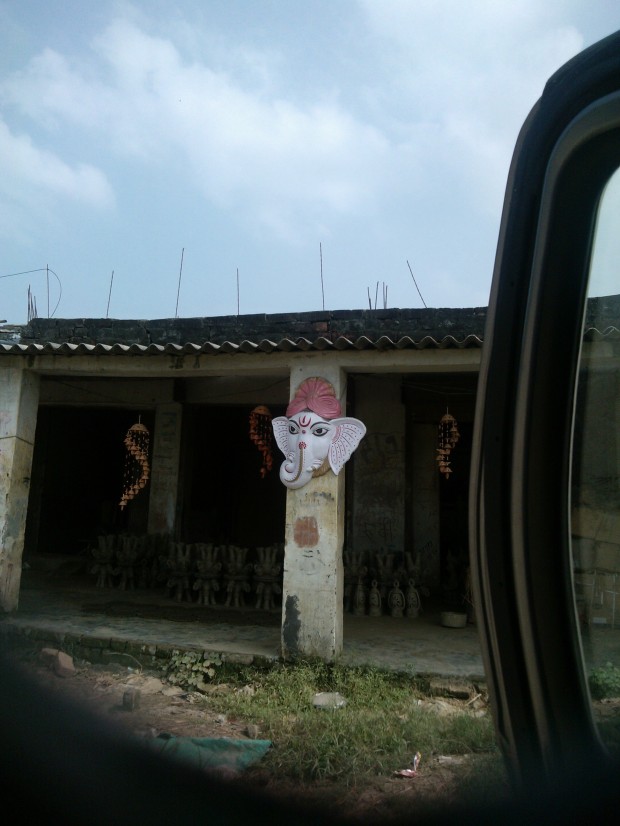 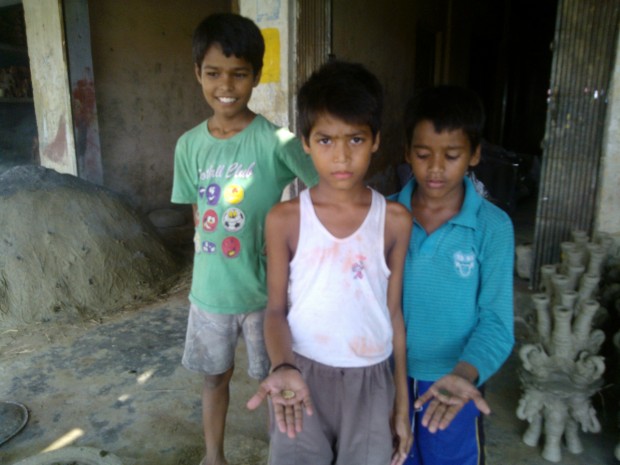 They are the makers of these beautiful images from terracotta! Hope Lord keeps these blessed souls truly happy 🙂 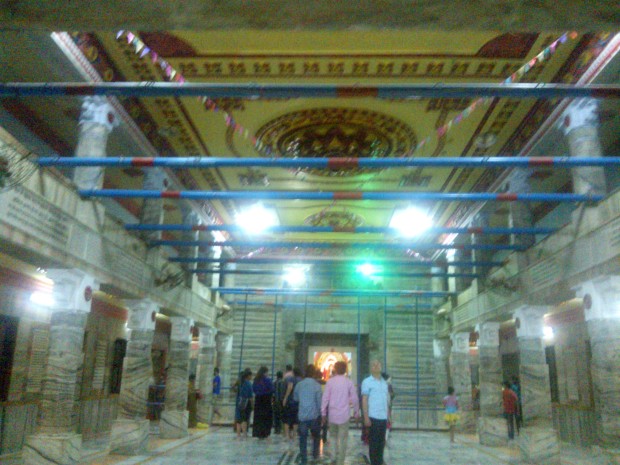 Beautiful Statues Of Various Yogis Inside The Temple 🙂 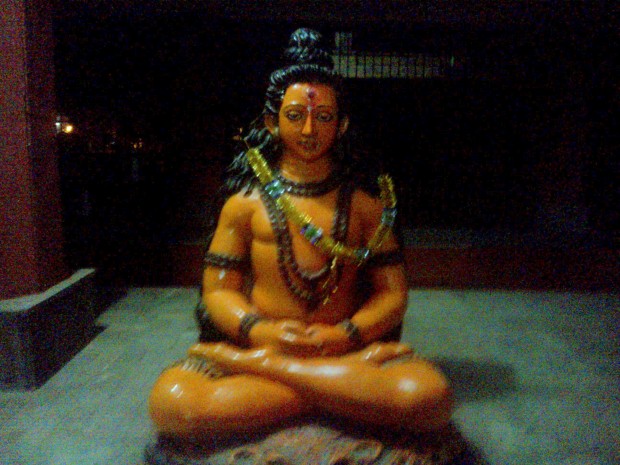 That’s Bheem Ji In Sleeping Mudra Inside This Temple 🙂 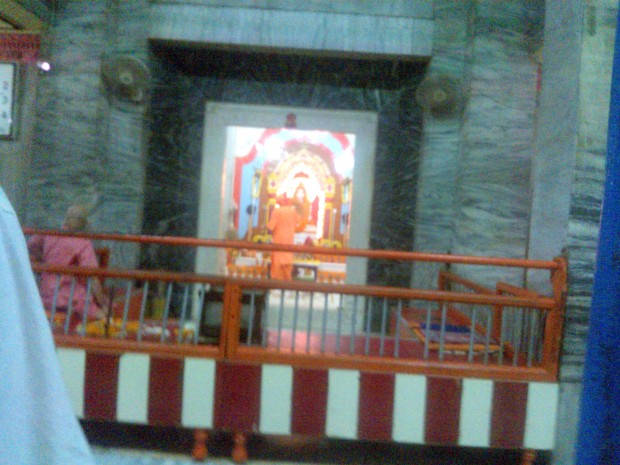 It would take a long time to erase memories of this togetherness with Mr. Genady And His Students 🙂

We reached there during evening hours. Deep silence greeted us 🙂 -) 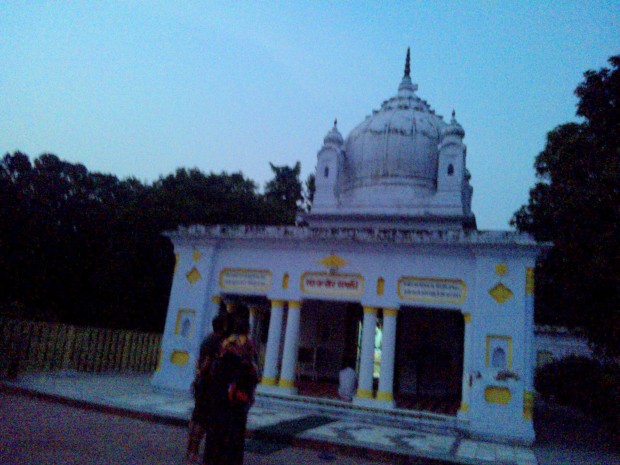 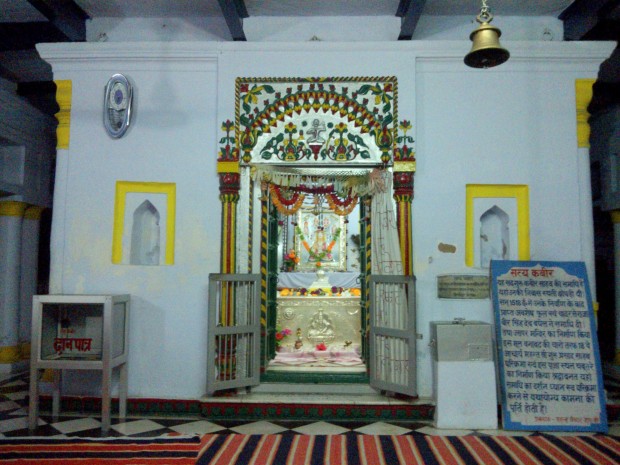 Inside The Kabir Temple Built By The Hindus! 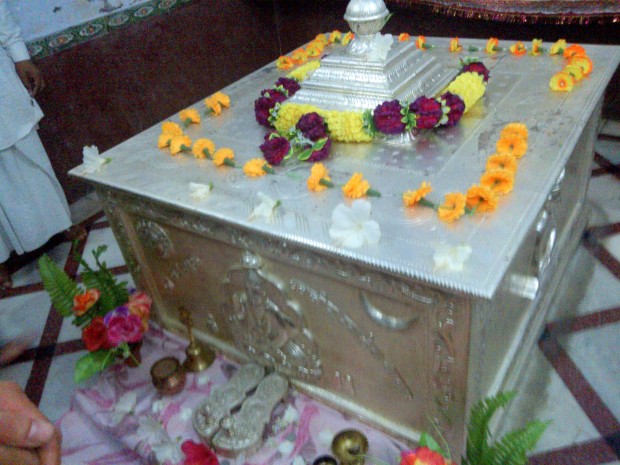 That’s Placed Inside This Temple 🙂

All Of Us In The Company Of Saint Kabir Ji 🙂

That’s Description About This Temple’s Origin 🙂

That’s The Structure Built By The Muslims Adjacent To This Temple Which Bears The Tomb Of Kabir!

Tomb Of Kabir Ji Placed Inside This Structure! It was relatively more peaceful site than temple where one could trace many visitors!

For Queries Posed By Alexandra In Hebrew All I Came To Say : I Don’t  Know What You Say 😛 😛 😛 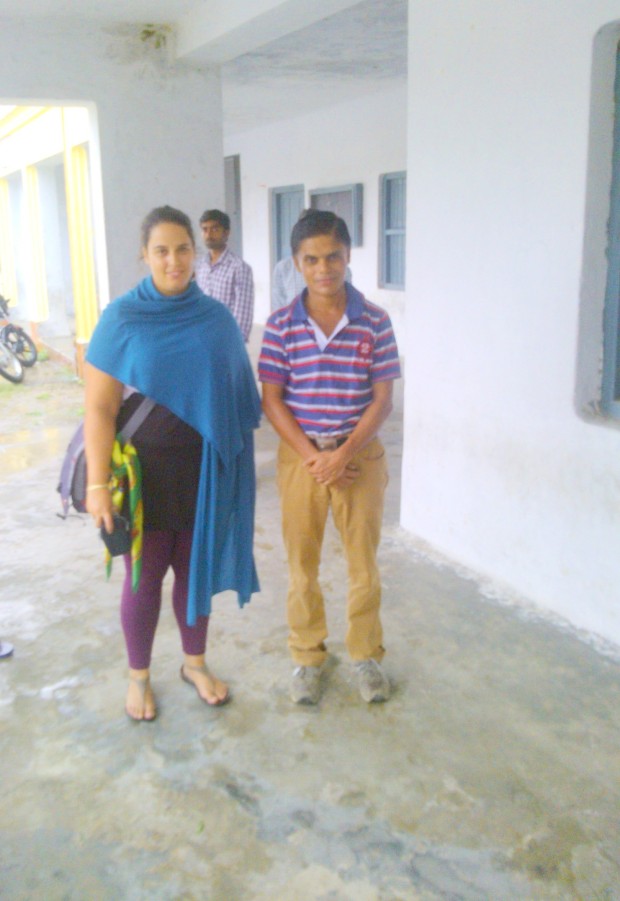 Found No Opportunity To Have Conversation With Fischer! However, I realized After Listening Her Speech At University That She Was Pretty Sensitive! And Yet As We Parted Ways At Railway Station On The Last Day She Made It Known: “Aapse Milkar Bahut Khushi Hui”. Me Too Felt The Same For Her 🙂 But With Realization That Modern World Is Not Made For Sensitive Souls!

At “Pathik Niwas” in Kushinagar 🙂 Shuddha Hindi is sometimes tongue twister 🙂 Anyway, this restaurant did not give the impression that it was run by government 😛 It was clean and service quite good 😛 😛 😛

All Of Us At Hotel Pathik Niwas In Kushinagar 😛 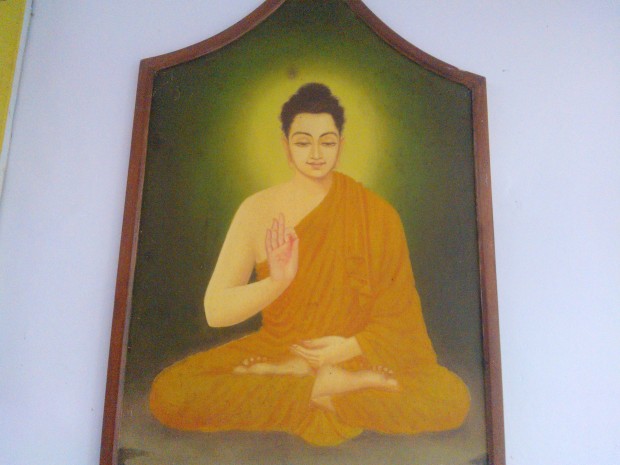 Another Image Of Buddha At This Restaurant 🙂 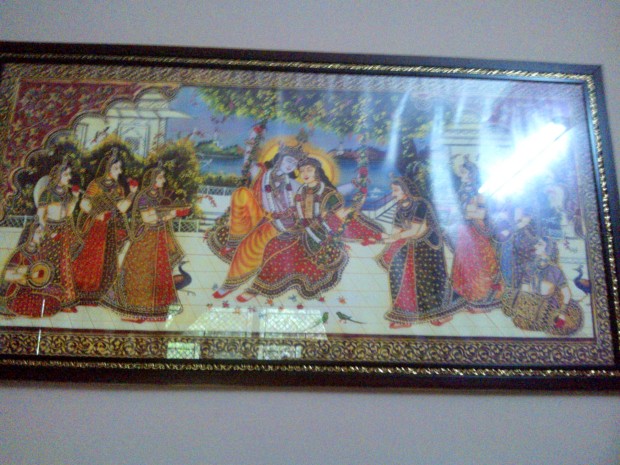 However, I Noticed This Beautiful Krishna Painting At Anand’s House Who Is Teacher In Gorakhpur!

Standing Before Ramabhar Stupa In Kushinagar. It’s  The Place Where Guatam Buddha Was Cremated Kushinagar is associated with Parinirvana of Gautam Buddha! 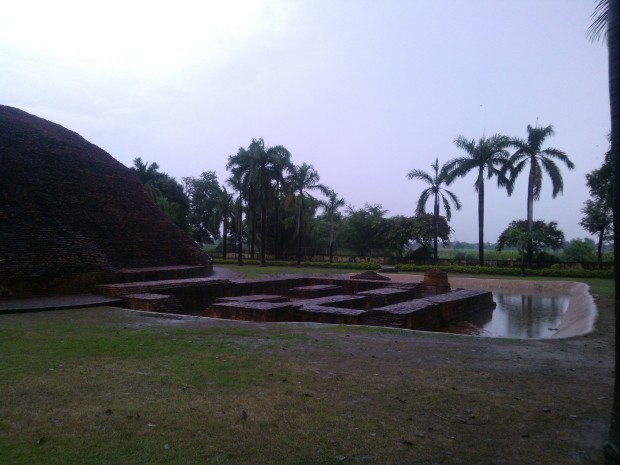 Ruins Of Stupa Inside Ramabhar Temple!

Tol Gorsky And Monk Under The Same Umbrella 😛 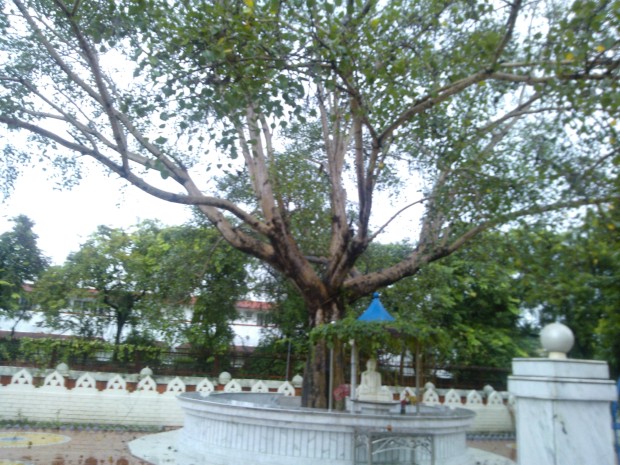 A Huge Peepal Tree Inside Japan-Sri Lankan Temple In Kushinagar! 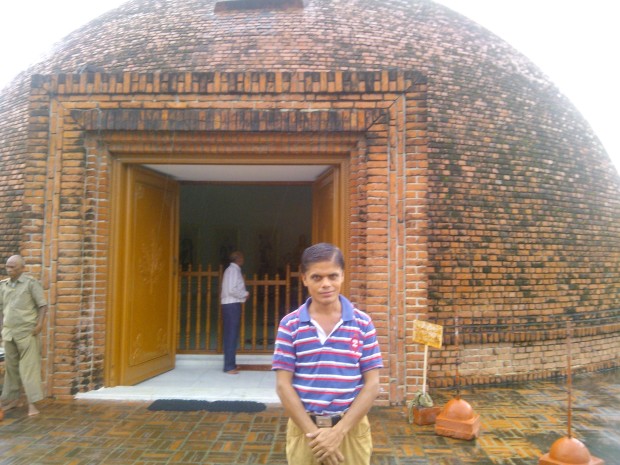 Inside View Of Sri Lankan- Japan Temple! This is used as place for meditation. I saw many people meditating at this place.

Standing Outside Mahaparinirvana Temple In Kushinagar 🙂 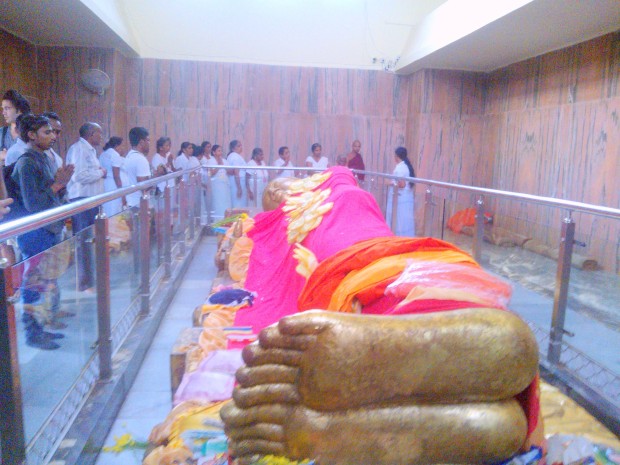 That’s Reclining Buddha! At This Place He Breathed His Last With Words “Behold now, brethren, I exhort you, saying , decay is inherent in all component things ! Work out your salvation with diligence” 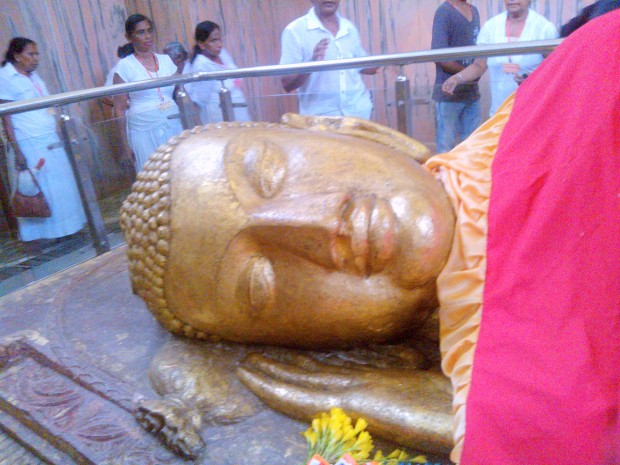 This Reclining Statue Built Of Chunar Sandstone Was Discovered By Carlleyl in 1876.

The Structures Unearthed During Excavation At This Mahaparinirvana Temple. 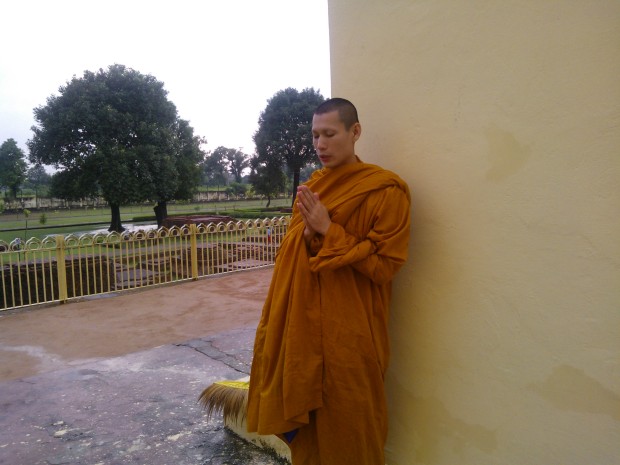 I Came To Witness This Monk Lost In Meditation 🙂 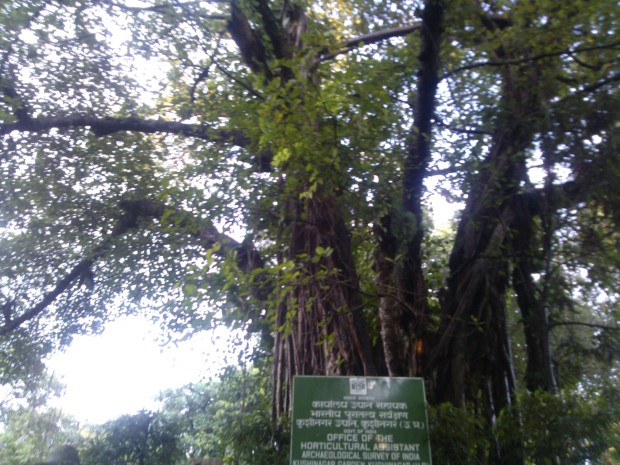 This Huge Tree Inside Mahaparinirvana Temple Caught My Attention 🙂 😛

Standing Before Burmese Pagoda In Kushinagar 🙂 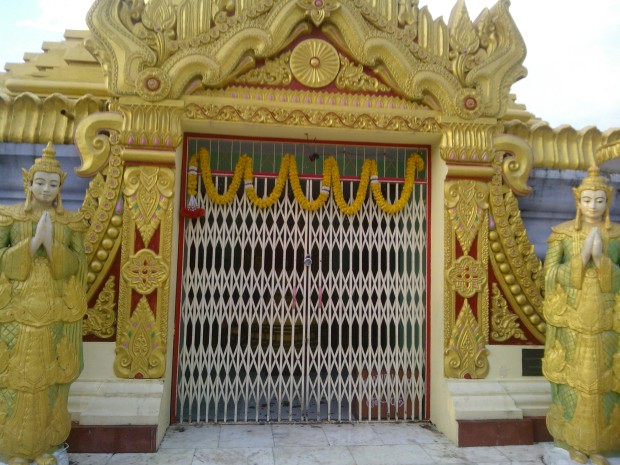 Beautiful Entrance Of This Temple 🙂

Must Thank To Lord That I Found Myself In Land Of Buddha 🙂 Luckily, I have Also Been To Sarnath!

Glad To Be In Company Of Such Lovely Ancient Structures!

Hope We All Remain Together 🙂 India Has Always Been Close Ally Of Nations Like Russia And Israel! They Came And Sang For Us Some Popular Bollywood Songs To Mark Their Respect For Hindi. And So It Would Not Be Out Of Tune To Attribute This Song To All Of Them ” Jaaiyein Aap Kaha Jaayenge Ye Nazar Laut Ke Phir Aaayegi :-)” 🙂 🙂 🙂 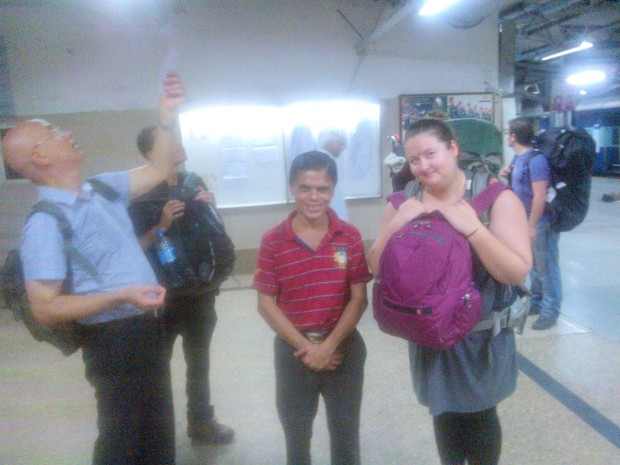 Departure Makes One Sad! But We Seem To Be Smiling 🙂

Noticed These Children Of Lesser Gods Inside My Train’s Compartment! Beautiful Faces Mired In Pain!! 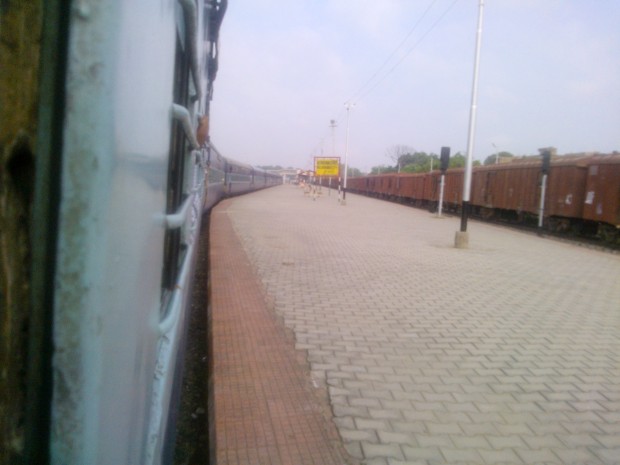