Rural India retains its rustic charm. Its demography remains serene and pleasing to eyes. However, lifestyle of people living in villages has changed dramatically over the years.  It has become as complex and superficial like the one prevailing in Indian cities. The lust to be in sync with the time has made innocent villagers  victim of capitalist forces. That has made them oblivious of their own rich legacy. Now they have dish antennas over their rooftops but they lack the expertise to work in fields! In fact, they have now become so used to sophisticated lifestyle that they feel reluctant in working in fields.

Anyway, my village Kanaura, falling under Mirzapur district in Uttar Pradesh, is situated at the banks of river Ganges. It’s surrounded by Vindhya Hills.  It’s obvious that beauty of nature has come alive in all its colours at this place.  This travelogue in two parts showcases the beauty which graces my village.  And yes, the train which one notices in this part is Allahabad-Mughalsarai Passenger, which runs right time in morning session but the return journey from this train is a delayed affair. It runs on every day sans Sunday.

That’s Yamunaji during morning hours…Just couple of months ago she was so furious when her waters caused huge loss…Now looks so pleasing…Anyway, railway bridge over this river is the first one as the train leaves the Allahabad station to move ahead on Mughalsarai-Howrah rail route.

The road also leads to my village but I prefer rail journey…It’s so romantic affair to be seated inside train’s compartment 🙂 …And I always prefer passenger trains for shorter journeys since it allows me to see life in totality!

And when train stops the eyes meet wonderful scenes :-)..The saint is so eager to catch the train 🙂

That’s River Tons..It’s tributary of river Yamuna and it originates in Garhwal region of Uttarakhand. 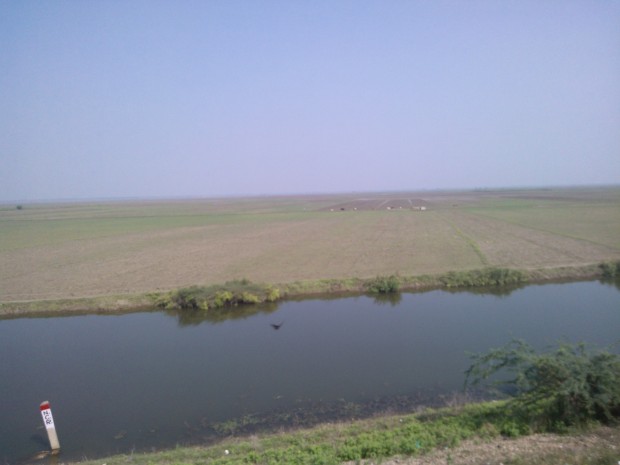 India is a huge country …This gets confirmed as you try to capture the distance from eyes through the train’s window! 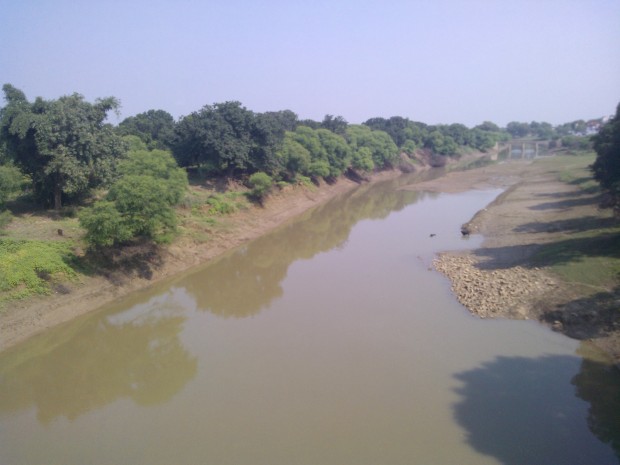 Such scenes outside the train’s window always delight me!

Just before Birohi Station This Curved Road Always Manages To Catch My Sight!

It’s so fascinating to see the activities when train halts at these beautiful stations! 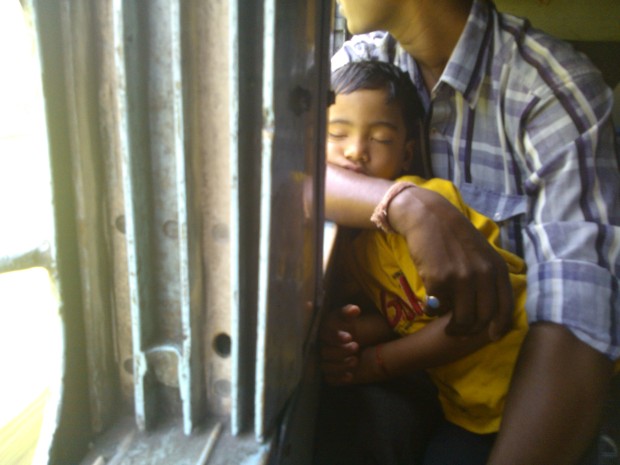 Innocence at its best..Sleeping baby inside the train’s compartment!

At Vindhyachal Station….This place associated with Goddess Vindhyachal Mata is very special in the hearts of Hindu devotees…This station is unique in a sense that it has Shlokas and Verses from Ramcharit Manas mentioned on the walls of the station.

A girl at Vindhyachal Railway Station…

Well, life is full of episodes of various types..Something you realize as you look outside the train’s window!

Mirzapur Station Is Where I Always Get Off If I Am On Super-fast trains…Then I catch an auto for my village …However, I need not to worry since this is passenger train and it’s bound to stop at my station 😛

So beautiful Indian girl..What really impressed me was that she was lost in such deep thoughts even at this tender age!

When I was a kid and this station arrived I was always taken aback by its small size..I used to wonder hey where is the station? Now when I have grown up I still fail to treat it as a station! It makes me smile..Even the name is so fascinating : JHINGURA :P…Anyway, my own destination station which arrives after this one is not only bigger but also so beautiful 😛 😛 😛 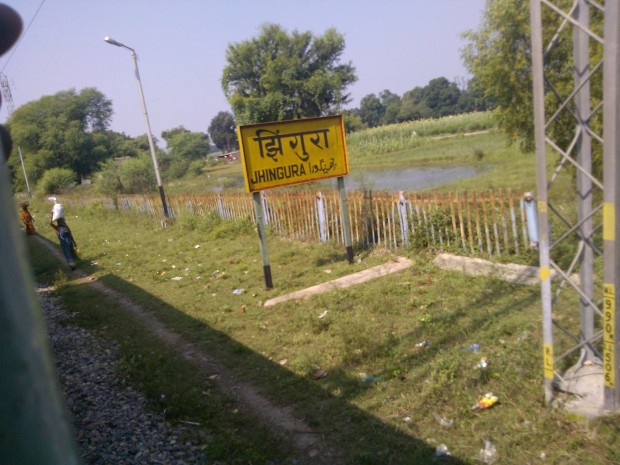 JHINGURA 😛 😛 😛 …I feel happy when I see this station…After all, it gets confirmed that next one is mine station 😛

That’s The Road Which Goes To My Village…If I Am On Auto This Is The Route I Follow…However, I Am On Train Now 😛

Pahara is a beautiful small station 🙂 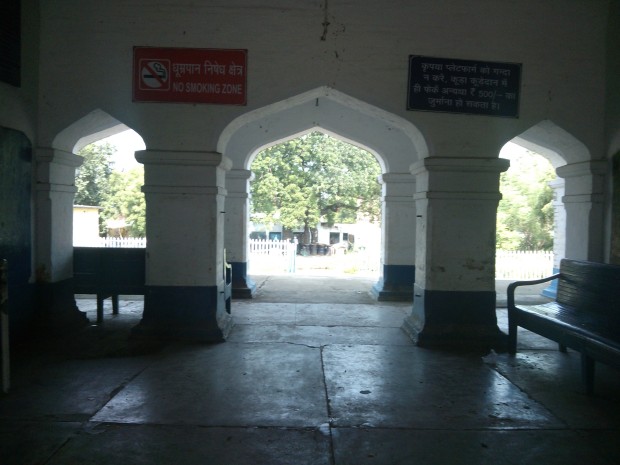 Inside View Of Pahara Station 🙂

These shops when I was kid did not have pucca walls 🙂 Anyway, I have my snacks here once I get off the train!

Anyone visiting my village shall be asked to take this metal road to reach my village Kanaura..However, I avoid this road since it makes the distance long..I prefer the muddy road exhibited in next picture 🙂 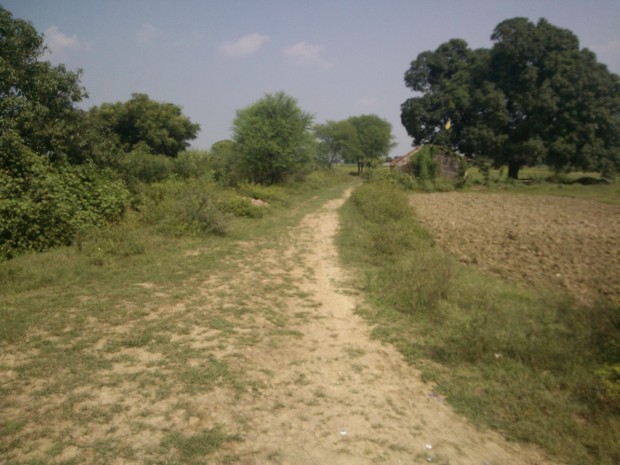 I have seen more than two decades of my earthly existence but really happy that this muddy road to my village remained the same 😛 ..I love leaving my footprints on it since childhood 😛

The muddy routes touch my soul with such scenes 😛

Finally, when I reached my new home near my fields at my Village I slept peacefully to wake up again after couple of hours to notice setting sun over my fields enveloped with lush green rice crop!

Another view of my fields from my rooftop 🙂 The vacant space you notice is meant for growing potatoes :p

That’s the way morning sun greets me at my new home in village…I have an old home also built by the ancestors but it will appear in part II of travelogue!

The huge Peepal Tree (Ficus religiosa) outside my home during early morning..Its leaves make lots of scary noise in the night time 😛 😛 😛

Early morning scene outside my modern home in village 😛 …Interestingly, if I take a morning walk on this road it leads to my old ancestral home…This roads ends at my old home…After that nothing else prevails other than huge banks of Ganges 🙂 🙂 🙂 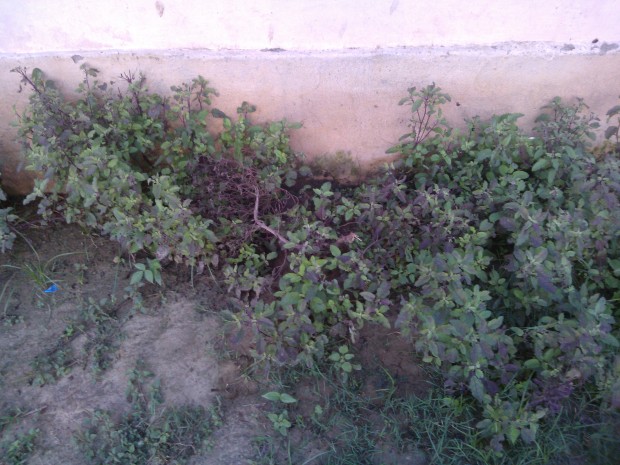 My mother planted just one small plant of Tulsiji..However, I notice it has spread everywhere 🙂

Morning view of my fields 🙂 It comforts not only the eyes but also my soul :p

Another view of my fields!!

The part two of this travelogue will have such breathtaking scenes at my village….That’s the way banks of Ganges greet me when I am at old home in my village 🙂 …Hope Ganges never loses her divine lustre 🙂

All the images have been clicked by the author of this post. The copyrights of the pics rest with this author. So I request not to make use of any of the pics without prior permission of the author or, for that matter, they can be republished  only after giving due credit to the author while using them in any way.