Celebrations, After Ajmal Kasab’s Execution, Hold No Meaning Until Islamic Terrorism Gets Wiped Out Totally

Well, we Indians are always desperate to elicit happiness from even the most insignificant happenings. That too when almost every alternate day, we are involved in this or that celebration. Have taste of the recent cause of celebration: Terrorist Ajmal Kasab, the lone surviving Pakistani terrorist of the 26/11 Mumbai terror attacks, hanged till death. Is this news worthy of receiving that much attention, the way Indian mainstream newspapers flashed it on their front pages, highlighting the jubilant mood which prevailed in the nation in aftermath of the death of Kasab?  It was turned into an event as if India had carved a defining moment in world history at that point of time. It appeared as if our always tight-lipped PM Manmohan Singh, started roaring like a true lion, with deafening intensity! Let me make it very clear, instead of putting it figuratively, that we need to intercept critical issues not in light of such minor gains. Instead of going overboard with such idiotic style of celebration, let’s learn to delve deep into resultant implications, when the issue pertains to sensitive issues.

The mainstream media is guilty of projecting the whole episode the wrong way. It first informed us about in a sensational style, the high level of secrecy maintained by the people involved in hanging process of Ajmal Kasab, adding that it was carried under the direct supervision of Indian Prime Minister Manmohan Singh, making the whole process bear close resemblance with Laden’s killing by USA, which was perfectly executed under the supervision of Barack Obama. Such colouring is absolutely out of place. Next we are informed by some sections of media about the high level of commitment of this UPA government, caught between the devil and the deep blue sea most of the time, in keeping at bay the threats imposed by terrorism. Isn’t mainstream media guilty of first giving rise to such flawed contrast in covert manner, and later, projecting it as some sort of moral victory for the government?

That’s certainly not the case. The death of Kasab got brutally delayed because of the slow judicial process, as he had been declared guilty way back in 2008. It would not be hard to imagine that government would have spent huge amount of taxpayers’ money in providing him great security, in offering food and lodging. So is there any merit in celebrations which took place? Does this government, failure on every front deserve any credit? If it’s that committed to send strong signals to Islamic terrorists, what’s the reason of delaying the death of  2001 Parliament attack death row convict Afzal Guru? If it’s that alert to avoid fresh attacks, why the same loopholes prevail, in measures concerned with internal security, which prevailed at the time of Mumbai attack? The commoners are still susceptible to same threats and a fresh attack remains a great probability. So isn’t our happiness misplaced?

This paid media, sponsored by vested interests, is corrupting the sensibilities of average readers by such crass sensationalism of minor happenings. It’s trying to deviate away our attention from more pertinent concerns- the real issues. It’s weakening our ability to frame any issue in right perspective. Such crass reporting of vain developments is no less than sweet poison, rendering ineffective the impact caused by uneasy questions. Let me put the record straight. I am not ardent fan of  Bal Thackeray, but I must admit that I liked his view that these dreaded terrorists do not need convictions after such lengthy trials. On the contrary, they need to be immediately shot dead. I mean what’s the point in subjecting a terrorist to trial, who was caught live on cameras killing people in cold blooded manner, with no sign of remorse, tainted with sadistic pleasure? But you ensured that he dies only after rejection of his mercy petition by the President- a petition which is never meant for such people! Never forget that had dedicated team lawyers under the headship of Ujjawal Nikam, didn’t pursue the case with that much sincerity, it would have simply not been possible to ensure conviction of such dreaded criminal.

In light of such facts, it’s really hard to believe that death of Ajmal Kasab highlights the strong commitment on part of the weak  UPA government to erase Islamic terrorism from Indian land. The slow process involved in the elimination of such dangerous minds  is only indicative of its lackadaisical approach and any conscious observer shall never treat it as sign of strong will. Strong will gets depicted when you get involved in serious manhunt of dreaded terrorist for years and kill him on the spot-the way USA killed Laden. Strong will gets projected when you ensure the killings of dictators by attacking a nation despite huge protests, sacrificing lives of so many of our own people. The targeted drone attacks engineered by CIA’s programme, in various parts of Pakistan’s tribal heartland, is what truly represents will to eliminate dangerous  minds! The strong commitment becomes evident when you ensure that such lethal attacks become a remote possibility, and for that you ensure that even foreign dignitaries have the taste of tough measures. It’s better this government stops fooling people, boasting of its so-called commitment.

Let me bring into light some of the important aspects related with hanging till death of Ajmal Kasab, which the mainstream media deliberately kept it away from the focal point of an average reader’s eyes, blocking him to form a substantial perspective. In a news item published in The Hindu, it was reported, citing recent UN General Assembly’s human rights committee’s resolution calling for a global moratorium on the death penalty, that ‘execution was an “unconstitutional act” of the State’. The Amnesty International, like always reacting in hypersensitive way in India related affairs, wondered about “unusual speed with which the mercy petition was rejected’, labeling it as something that would give rise to a “dangerous precedent”. The Kafila publications, best place for anti-India secularists to publish their outburst, taking a similar stance as one taken by The Hindu, stated that “the very fact that Kasab had indeed committed an unpardonable crime is what renders him eligible for mercy”.  One writer, belonging to the same publication, went ahead in unleashing his frustration, termed the jubilant mood of the victim’s families of 26/11 as “barbaric”. I am die-hard champion of freedom of expression but I wish to know do such anti-India sentiments constitute freedom of expression? Very recently, a cartoonist was sent to jail for dishonouring national symbols and this writer is interested in knowing from the government what actions has it taken to stop such publications from repeatedly hurting the national pride?

Almost challenging the so-called commitment of this UPA government, just after the execution of Ajmal Kasab, the commander of Lashkar-e-Taiba (LeT) was quick in communicating his intentions to news agency Reuters: “He was a hero and will inspire other fighters to follow his path.” The news of Kasab execution came as a bolt from the blue for the Taliban leaders in Pakistan who were badly hurt that a “Muslim has been hanged on Indian soil”. If that was not enough, Pakistan’s failure to keep its promises intact of acting against perpetrators of the 2008 Mumbai terror attack has only added fuel to the fire. It still insists on not having enough evidences sustainable in court, which is a blatant lie in eyes of India, as it had already presented enough concrete evidences. Strangely, a major political party in Pakistan, headed by cricketer turned politician,  Imran Khan, has demanded the hanging of Indian prisoner Sarabjit Singh. Such a knee jerk reaction is enough to suggest the level of derailment of Pakistani leaders.

In a shocking disclosure in The Economic Times, B Raman, additional secretary (retd), Cabinet Secretariat, Government of India, virtually shattering the myths spread by the Government that it’s fully prepared to counteract terrorism iron-hand way, stated that “we were a soft state before 26/11 and we continue to be a soft state after 26/11 and the execution of Kasab”. The government, I am sure would  take political mileage, but it would be better for it, if it pays attention to words of sensible minds like B Raman and take appropriate measures, instead of fooling the people with help of mainstream media with rhetoric and crass sentimentality. “Kasab is no more, but the jihadi terrorist threat posed by the state of Pakistan and its non-state creations remain as serious as before. We need a comprehensive counter-terrorism strategy to deal this. We do not see any signs of it so far.” (B Raman) What’s the point in feeling glad, after the execution of Kasab, when it has utterly failed to put right pressure on Pakistan to heed its line of action?

Let’s stop being swayed by such misplaced emotions. The citizens of India should not be influenced by such rhetoric, and, instead, put pressure on government to ensure its safety in a proper way. It should replace this government with one which better suits the destiny of nation, allowing better rulers to be in the driver’s seat. The country needs few more souls like Indira Gandhi, K P S Gill and Jagmohan, to name a few, to teach fitting lesson to dangerous organisations like  Indian Mujahideen (IM), aided and funded by foreign nations including Pakistan. That’s why it becomes imperative for citizens to use their voting rights sensibly, and a failure in this regard, only ensures an unstable future. So ‘wake up sid’ it’s now a do or die situation! Act before it’s too late. 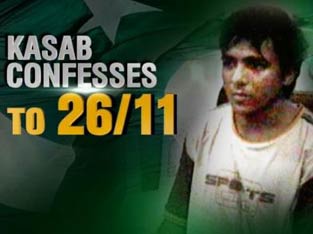 Killing The Petty Criminal Means Nothing, Kill Their Commander!